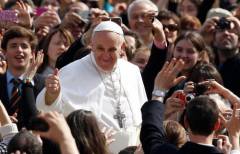 Rio, Brazil, July 28, 2013 (LifeSiteNews.com) – Pope Francis has added a powerful pro-life statement to his closing mass at World Youth Day in Rio de Janeiro today, personally requesting at the last minute that a seriously ill child whose parents rejected abortion be presented during the offertory procession at the Mass.

According to Fr. Federico Lombardi, the Vatican’s press officer, “During the final mass of World Youth Day, Pope Francis will welcome this child during the offertory procession of the mass as a gesture of welcome and offering of a life to God.”

Fr. Lombardi said the pope first encountered the child, who suffers from anencephaly, a condition in which a baby is born without a significant portion of its brain, as he was leaving the cathedral of St. Sebastian in Rio de Janeiro on Saturday. The parents presented the baby to the pope.

Most babies with anencephaly do not live more than minutes after birth, although some have been known to live for months or even years. Many of them are aborted before birth.

According to Fr. Lombardi, “The parents did not wish to abort their child even though an abortion would have been allowed legally for such a case.”

“The parents wished to welcome the gift of life.”

Millions of youth are expected to join today’s mass, the concluding event of the five day World Youth Day festivities, which brought the world’s first Latin American pope to his home continent.

According to some estimates, as many as three million youth gathered on Copacabana beach for a prayer vigil yesterday evening, during which the Pope urged them to eschew the siren call of money and power