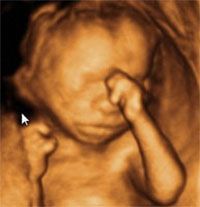 Today, Governor Scott Walker signed Senate Bill 206 (Sonya’s Law) into law. This important new law requires that women seeking abortions in Wisconsin be given the opportunity to see their unborn children through ultrasound.

Just hours before Walker signed the law, the Planned Parenthood abortion business announced it would file a lawsuit seeking to stop women from seeing these ultrasounds.

“We thank Governor Walker for signing this important piece of legislation into law,” said Wisconsin Right to Life legislative director Armacost. “Sonya’s Law will empower women to make truly informed decisions regarding how they will proceed with their pregnancies and will protect the lives of women who experience complications after their abortions.”

“The announcement of an impending lawsuit is no surprise to anyone,” said Susan Armacost, Legislative Director of Wisconsin Right to Life. “It appears that the court challenge will focus on the hospital admitting privileges requirement. Apparently, Wisconsin’s abortion clinics don’t believe their abortionists need to have hospital privileges at a hospital located within 30 miles of their clinic….or anywhere at all. Currently, when a woman experiences hemorrhaging or other life-threatening complications after an abortion in Wisconsin, the clinic puts her in an ambulance and sends her to a hospital ALONE where she is left to her own devices to explain her medical issues to the emergency room staff. The abortionist who performed the abortion is nowhere to be seen. This deplorable situation must change.”

Armacost said the new law is on sound constitutional footing. Nine other states have passed laws requiring abortion doctors to have hospital admitting privileges. Missouri’s admitting privilege law was challenged and upheld by the Eighth Circuit Court of Appeals.

The bill was named after Sonya, a mother of two children who learned she was pregnant with her third child this past November. Sonya was stunned because she had taken precautions to not get pregnant.

Sonya worried about how she could handle another child, emotionally and financially. She seriously thought about abortion.

Sonya saw a Milwaukee transit bus ad about a free ultrasound and decided to have one. She learned she was seven weeks pregnant. Once she saw her child and realized his heart was beating, Sonya made an emotional connection with her baby and made the decision to carry him to term. Sonya will deliver a baby boy this month.