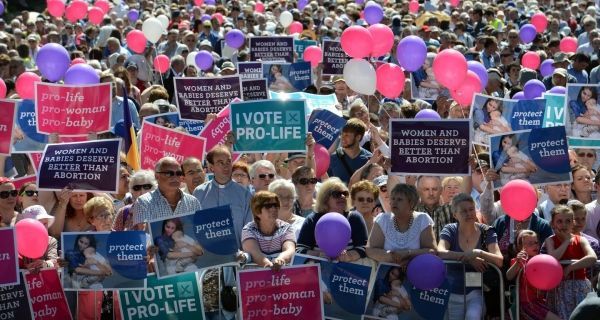 A section of the large crowd attending the Pro-Life vigil at Merrion Square, Dublin. Photograph: Eric Luke/Irish Times
Thousands have rallied in Dublin against the Government’s proposed legislation on abortion. Organised by the Pro Life Campaign, the large and colourful demonstration called on the Coalition to “scrap the bill”.
Many speakers and several of those voicing opinions on the video shown on a large screen beside the platform warned the Government on its position.
“We gathered in Dublin on the coldest day of the winter, here today on the hottest day of the year and we will be here again on election day,” said Caroline Simons, legal adviser to the Campaign.
She said Taoiseach Enda Kenny had no mandate “other than keeping his pro-life promises” which she claims Fine Gael made before the last election.
Two video addresses were shown to the crowd which flooded Merion Square West and South.
Michael McAreavey, widower of Michaela who was mudered on honeymoon in Mauritius, said there was nothing more positive “than standing up for the human rights of another person, especially the most vulnerable”.
“Other countries have made the mistake of legalising abortion and have unleashed a terrible sadness across society,”
His father-in-law, Tyrone manager Mickey Harte, was among the crowd below the platform.
In an emotional contribution, Edel Best of Women Hurt, an organisation representing those who have had abortions, said she had suffered after two abortions.
“Abortion stole my children,” she said.
There was also a video presentation from Celeste Beal King, a grand-niece of murdered human rights campaigner Dr Martin Luther King Jr. “A huge challenge faces your movement, but I challenge you, Never lose heart,” she said.
She said it was “noble” to say Yes to life and No to abortion.
Maria Steen of the Iona Institute said the proposed legislation would forced doctors and other practitioners “to go against the first principle of medicine – to do no harm”.
Ide Mac Mathuna of Youth Defence said the population was being “bombarded with pro-abortion propaganda and our own Government are allowing themselves to be bullied and dictated to by the pro-abortion lobby.”
Jennifer Kehoe of the organisation One Day More and mother of a child diagnosed with severe illness in pregnancy claimed she and her husband were told “most people would go to England”.
She clalimed other parents faced with such a crisis were “frightened into abortion” and made feel that they had “the expectation and duty” to opt for abortion.
“Legality brings acceptability,” she said.
Official estimates are reported to have put the crowd at between 15,000 and 20,000 although protest organisers claimed “a conservative figure of 50,000”.